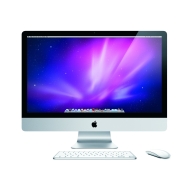 The Apple iMac has received some power and performance upgrades since its last model in mid-2010. It's now got a second generation Intel Core i5 quad-...

Only incremental upgrades since the last iMac model ; There's still no Thunderbolt gear

Apple's new iMac is more powerful than the old model. That's about it -- nothing magical or revolutionary has been added to the all-in-one Mac desktop. That's not necessarily a bad thing, since we think it's one of the best all-in-one PCs on the market...

It's true. Big can be beautiful.

The heaviest of heavyweights in the all-in-one field has seen another update, another batch of new internals to liven up the aging (but still classy) chassis....

New components under the hood make for a faster iMac. But they're packed into the familiar chassis of yesteryear.

The Apple iMac's 27-inch 5K display remains the most color-accurate monitor we've seen thus far in an all-in-one, and performance is much improved. Plus it's got two USB-C/Thunderbolt connectors which can drive more external displays and faster file...

The overall design remains unchanged since 2014 -- including the inconvenient rear-mounted ports and SD slot.

The already impressive 27-inch 5K iMac gets some welcome spec upgrades for 2017, but rival Windows machines have closed the gap.

One key selling-point about the iMac was that it offered enough power to be a premium home computer but wasn't so overpriced that it encroached on the territory of the Mac Pro, has this divide now gone?

This top-of-the-range 27-inch iMac with a 3.4GHz Core i7 processor is an amazing machine, but far from cheap at over £1800. Those with high-end needs might well consider it worth the money, but with the sub-£1000 entry-level model in the 2011 refresh...

Apple's 27-inch iMacs stand out largely because they offer bigger displays than any other all-in-one. The newly updated 21.5-inch iMac has always had a harder time persuading buyers thanks to the glut of 23-inch Windows-based all-in-ones in the same...

As the most-affordable iMac, the Apple iMac 21.5-inch offers competitive speed, the unique potential of its Thunderbolt port, and Apple's trademark design leadership.

The 21.5-inch iMac isn't the best all-in-one for home entertainment, and its performance competitiveness suffers without an option for more video memory.

Apple's $1,199 iMac doesn't offer the same home entertainment features as Windows-based all-in-ones, but its speed, looks, and the future utility of its Thunderbolt port make it a strong choice for performance-sensitive professionals.

Hard to believe it's only been 10 months since the last iMac update, but Apple's venerable desktop needed a quick bump to stay current with Intel's Sandy Bridge processors and the Thunderbolt...

No Blu-ray drive ; Ultra-glossy display ; Thunderbolt not yet useful

If you own or run a graphics-oriented business, you can stop buying Mac Pros and switch most of your staff to the new Apple iMac 27-inch (Thunderbolt).

Only Thunderbolt input for display (No HDMI in, no mini DisplayPort in). No Blu-ray. Could use a matte screen. Pricier than other high-end all-in-one desktops.

Another nit is Apple's shunning of Blu-ray technology. Internal Blu-ray drives are not an option on any iMac. Apple doesn't view Blu-ray optical discs as a replacement for data DVDs, and would rather you bought your HD videos from the iTunes Store...

No eSATA port. Gloss screen may irritate some.

While others have tried and failed, the iMac is still king of the hill when it comes to all-in-ones. All that's left to ask for is faster external storage and better SSDs, but for now it still comes highly recommended.

Only incremental upgrades since the last iMac model ; There's still no Thunderbolt gear