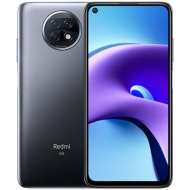 The Redmi Note 9T brings 5G to a low-cost device with middling specs, but another Xiaomi phone could limit its appeal.

Relatively fast to use Affordable 5G Feels good in the hand

The Xiaomi Redmi Note 9T is a decent phone for the price. It’s fairly snappy in use, it has a nice design that fits snugly in the hand, and you’re getting 5G compatibility on a budget. It’s not perfect – the display isn’t as bright as it could be, and...

Xiaomi Redmi Note 9T review: one of the best 5G phones on a budget

The Xiaomi Redmi Note 9T improves on its predecessor and earlier Note 9 phones, and brings 5G to the Redmi line.

Many improvements over predecessor Affordable 5G

Cameras are only okay Too many pre-installed apps

The Xiaomi Redmi Note 9T is a decent cheap phone, with improvements over its predecessor and some useful new features. It's not perfect - there's a recurring Xiaomi software problem and so-so cameras, but there's lots to like here.

The 'T' version of the affordable Note 9 brings a solid feature set - 5G, large screen, massive battery - but is somewhat a software battle.

Great value for money is the key sell here. While the strong feature set sounds like enough to see off its rivals, the 9T suffers from push and pull with its software that causes irks, meaning it's an affordable phone that'll suit some - but not all.

The Redmi Note 9T from Xiaomi is shaking up the 5G budget phone market, with fast performance and a great battery life - all for a desirable price

It's only January, but the 5G Xiaomi Redmi Note 9T is already a solid contender for budget phone of the year

The Redmi Note 9T is miles better than its bargain price might initially suggest. With performance matching handsets that cost twice the price, it’s a reliable choice especially if you want to dip your toes into the UK’s ever-expanding 5G network...

Xiaomi delivers a solid phone that takes the fight to Realme and OnePlus in the budget market. Find out more in this Redmi Note 9T review.

Mediocre display ; Average cameras ; MIUI 12 not for everyone

The Xiaomi Redmi Note 9T is a solid phone that takes the fight to Realme and OnePlus in the budget market. If you're looking for 5G and the best battery life for the price, look no further than the Note 9T. However, if a dazzling display and punchy...