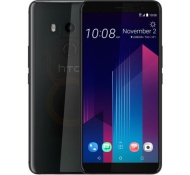 Uses last year's parts ; Only a minor upgrade on the regular U11

Battery life is the second area in which the U11+ seriously improves on the U11. HTC’s upped the U11+’s battery capacity to 3930mAh, which is a marked improvement on the original’s 3000mAh cell.

HTC U11+ could have been the next big Pixel, but it just wasn't meant to be. Instead, it became the next squeezable HTC flagship fully equipped to compete with Google's XL sequel. Underdog or not, the HTC U11+ has the dog tags of a fighter.

HTC U11 Plus review: when more is less

We review the HTC U11 Plus, the phone that was once intended to become the Google Pixel 2 XL

Be careful what you wish for

HTC U11+ review: a powerful and stylish flagship that you're (probably) not going to buy

Powerful, stylish and innovative, but released a little too late to matter, the HTC U11+ plays all the right notes at the wrong time

Average battery life ; Screen isn't as bright as competitors ; Only available from HTC

The HTC U11 Plus is a touch bigger than its predecessor, but it still keeps the quirky squeezy navigation thing.

The HTC U11+ is a complete package, but it launches at a time that sees it more expensive than comparable hardware rivals, while new models will

Nice design - especially if you can get the translucent model ; Plenty of power ; Great display (with a caveat) ; Good camera ; Waterproofed design ; Solid battery life

HTC software additions don't add much ; Display has ghosting issues in night mode ; Low brightness levels can cause flicker ; Some will see the hardware as dated at launch

The HTC U11+ is a complete package, but it launches at a time that sees it more expensive than comparable hardware rivals, while new models will arrive to distract hardcore fans. That aside, a great build, excellent audio and a (mostly) solid camera...

Screen could be brighter ; No headphone port ; Not sold through UK networks, high SIM-free price

Probably the best phone HTC has made in years, but it’s arriving just a little too late

HTC U11 Plus review

HTC gives its U11 phone the ultra-widescreen treatment

The HTC U11 Plus doesn't offer that much more than some phones released almost a year earlier. However, solid battery life, a slim screen surround and a great - if slightly slow - camera see it through.

HTC U11 Plus smartphone review: When bigger isn’t necessarily better

If last year's U11 lacked presence, this year's U11 Plus is worse. It's a good phone, but it's pricing places means that it's competing with the Galaxy S9

If last year’s U11 lacked presence, this year’s U11 Plus makes things worse. It’s a good phone, but it’s pricing places it in direct competition with, at the very least, the stunning Samsung Galaxy S9.

HTC U11 Plus Smartphone Review

Trending. The HTC U11 Plus emerges about a year after the U11 and offers very similar specs. It comes with more storage space, and the new Super LCD display now has a trendy 2:1 aspect ratio. Moreover, the battery also gets a significant bump. You can...

With the U11 Plus, HTC stays true to its design. Nevertheless, it gives the new flagship device a smaller color palette than the U11. HTC does a lot right with its latest flagship and again relies on the tried and true staples that we already saw in...

Prissammenligning for HTC U11 Plus / HTC U11+