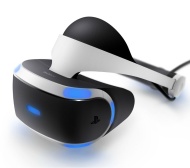 PlayStation VR is the headset that may bring VR to the masses.

Makes a mess ; Not as powerful as Rift or Vive

Even with everything it does to make virtual reality more accessible and affordable, PlayStation VR isn’t for everyone. It’s still several hundred dollars, requires a fair amount of set-up, and there are still only a handful of games that run smoothly,...

Sony has entered the world of virtual reality with PlayStation VR. Sony's headset represents the cheapest of the current “big three” on the market, and is the only one currently available to console gamers.

No performance changes ; Limited efficacy of camera and Move controllers

We were very impressed by the PSVR when we first got our faces in it over one year ago, and it remains unmatched as an entry point for high quality consumer VR. The upgrades here are all welcome improvements, that, to be honest, probably should have...

Requires PlayStation Camera, which is not included. Slightly less powerful than its main competitors. Some motion-tracking hiccups when playing in brightly lit rooms.

Graphics-intensive, device-tethered virtual reality has been chugging along for a solid year, but it's still a fairly expensive novelty with few must-have experiences on any system. That said, the PlayStation VR offers the best balance of price, power,...

PlayStation VR review: now on sale, but is it better than life?

No, but PS VR is immersive, affordable and a dump truck load of fun

It may not have the state-of-the-art tracking technology found in the HTC Vive, but the PlayStation VR is accessible, user-friendly, well-supported and above all, affordable.

The PlayStation VR is the most accessible, affordable and user-friendly full VR option on the market. Sony has promised support from a long list of developers down the track but the immediate launch games are pretty solid as well.

Its single-camera tracking system occasionally feels lacking and you may have trouble when you turn around. The PSVR's graphical fidelity is occasionally noticeably lower than what's possible with HTC Vive and Oculus Rift.

We can't count the amount of times someone has said 2016 would be the "year of VR", ourselves included if we're being honest, but we're 10 months in now and it's been anything but. Setting up the PS VR has proven a troublesome project, especially with...

Set-up can be long and frustrating, tracking issues can occur, screen lower resolution than rivals, games can be pricey

Setting up the PS VR has proven a troublesome project, especially with Camera placement and calibration, and that is worrying considering it will invariably attract plenty of less tech savvy customers. But the pay-off at the end is a superb virtual...

When you say virtual reality to people, they usually say one of two things: if they are old enough, they talk of fond memories of watching The Lawnmower